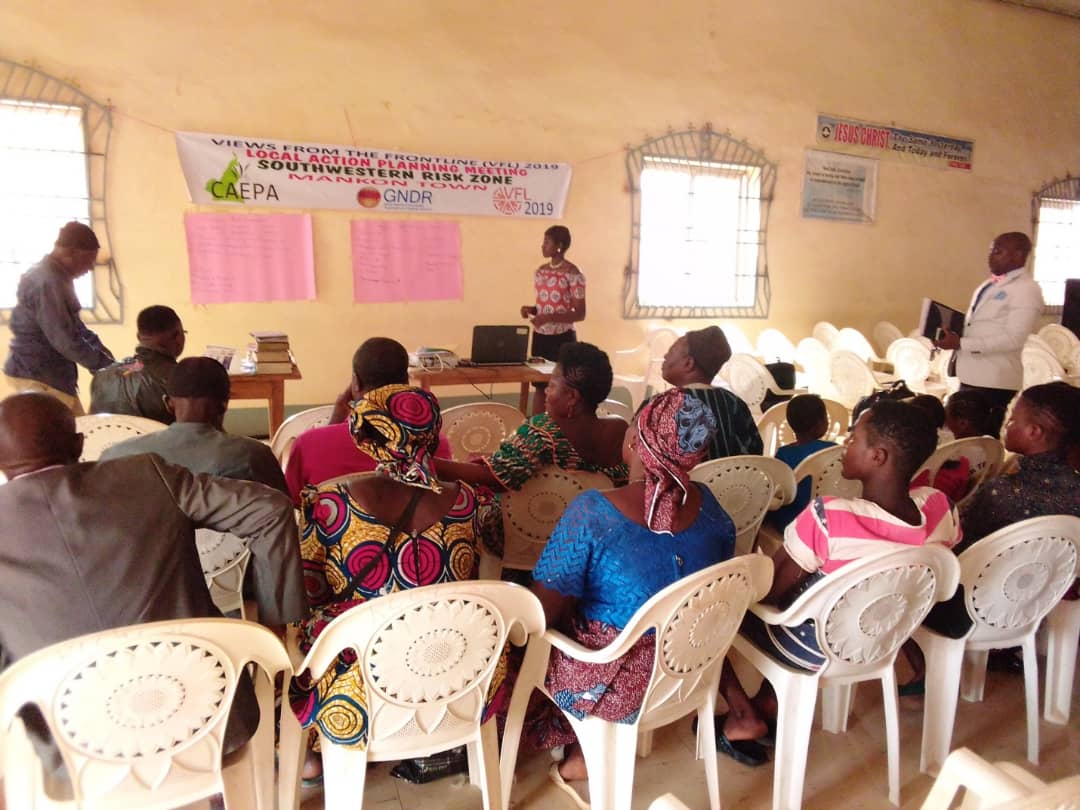 Recently, Views from the Frontline (VFL), a program established by the Global Network for Civil Society Organizations for Disaster Reduction (GNDR) identified Mankon as one of the risk areas of the southern zone in a survey. Right after the identification, CAEPA Cameroon taking cognizance of the situation took the responsibility of the development of the region in their hands. Before CAEPA, for several years, the people of Mankon were facing huge problems from flood and pollution. The local community struggles for even basic needs like access to water. Many NGOs have tried to help them in the past but unfortunately, most of them failed; even though the locals made tried to solve their water problem they have failed due to the lack of sufficient resources.  However, the recent GNDR seed funding was a God send and CAEPA has started working on various projects resulting in the community being grateful for these projects as they feel its most timely help to alleviate their problems.

To escalate the progress of the development, CAEPA started working on the local action plan and organized meetings with the community to get their opinion and discuss how the problems and issues are affecting them as a community, what can be improved to provide long-lasting solutions. The action plan meeting with a total of 45 participants comprised 15 women, 10 men, and 20 youths bringing together a variety of stakeholders from diverse backgrounds such as small farm holders, traders, private organizations, local government, educational institutions amongst others, with an agenda of listening to the participants. Following the meeting, the outcome from the survey was presented to the community in order to identify priority actions as well as steps to be taken to achieve each of the priority actions. For every action, teams were put in place to serve as the overhead and a plan of work was prepared.
After the presentation of the survey findings, the prioritization and validation of the conclusion, the opinion of the stakeholders was taken to get their buy in so that the implementation of the projects will go a long way to solve the community problem. The first priority action decided with the consensus of the stakeholders was ‘Provision of borewells’ with a time frame of Mid-March to June, followed by ‘Pollution’, which is also a major problem and a time frame of Mid-March to May was set  and lastly, ‘Flood’ with a time frame of March to May to be completed. The community votes for the nominees to head each of the actions and are represented to include all sections of the community like a man, woman, and youth.

All three priority actions decided in the meeting are very important to work for the development of Mankon and every action demands appropriate implementation step by step, for example to deal with Pollution, priority actions required are sensitization, identification of dumping sites, arranging means of garbage transport and provision of a waste control unit; to successfully achieve these actions, we need to do a geographical survey of the area, arrange equipment and materials like wheelbarrows, spades, gloves, boots, face masks, etc. and lastly, installation and training of the teams. All these steps and actions will require the help of CAEPA, engineers, and the support of community members.

As implementation of these actions demands resources, manpower and funds; CAEPA is doing its best with the existing resources and funds allotted by GNDR, but as mentioned earlier even performing micro actions such as ‘Identification of drainage sites’ this includes costs of Communication, transportation and skilled labour which are not directly visible but take up a portion of the budget. Hence, there are many costs, time, and effort needed for successful completion of the project. And it will require the help of various individuals/ philanthropy bodies of the world who could contribute to this by helping CAEPA strengthen the local civil society and bring about change for the good of the society. Increased funding will not only help to get better quality resources to get the work done well but will also increase the overall efficiency of the project.