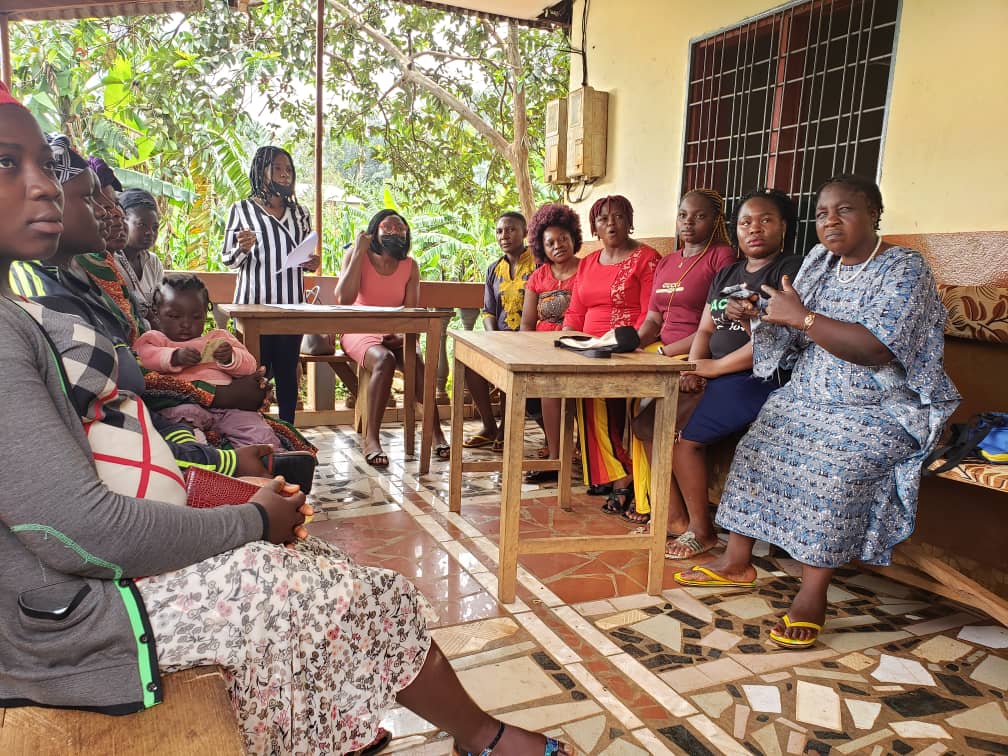 The spread of the COVID-19 pandemic has exacerbated the already unstable situation in the North West Region of Cameroon. Gender-based violence (GBV) such as female infanticide, forced marriage, and, most commonly, intimate partner violence (IPV) - of which it is reported that nearly one in five partnered women and girls have been victim - already common in this region has seen a drastic increase during the pandemic. To assess the impact of the pandemic and to better understand the specific concerns and needs of vulnerable women and girls in communities, CAEPA undertook a series of focus group-based assessments in June 2021 targeting the Mbelem Women and Men Group in Mbelem, Bamenda III Sub-Division, and the Hairu Women Group, the Barca Group, and the Nara Women Group in Ntambang, Bamenda III Sub-Division. Their aim was to identify the main threats to the safety of women and girls as well as to assess the services available, helping them to better advocate and plan for the women in these affected communities.

In the focus groups, three key factors were identified as issues contributing towards GBV: a culture of silence, distrust of medical authorities and outsiders, and gender-based traditions, with one female respondent, suggested that ‘women have to succumb to men and respect them…even in the bible women were made from a man’s rib’. Traditionally, as another woman pointed out, women are not permitted to go out and work to support themselves or their families. Further, while most of the focus group participants had the experience of taking a rape victim to the hospital for medical attention, and support such as Plan Cameroon and Medicine de Mon, Women Empowerment and Social Welfare were mentioned as sources of assistance, it was clear that most survivors do not make use of these services except for immediate medical attention. Most women at present prefer ‘confiding in a close friend’ or simply staying silent as the polaaku culture, a culture of silence, blames and stigmatizes women who have suffered GBV. There is a distinct distrust of medical authorities and outsiders, with participants suggesting that hospital workers might not handle cases with confidentiality and the president of Nara women’s group describing aid counselors as ill-trained on case management and specifically requesting that engage in more training to develop these services so that victims and survivors can be confident in their support.

The impact of COVID-19 is clear: 80% of the Mbelem group and 60% of the Ntabang groups concurred that, irrespective of age group, women and girls had become more at risk to threats of economic violence, sexual violence, rape, IPV, and early marriages during regional crises and the COVID-19 pandemic, particularly in the period from 2017 onwards. The economic impact has meant that women, earning less and holding less secure jobs, have been forced into greater dependence on perpetrators and has created conditions in which perpetrators might exploit women’s basic survival needs. Furthermore, physical restrictions, confined living conditions and the resulting social isolation have compounded the vulnerability of women in this region. Focus group participants also noted that children’s inability to attend schools due to the pandemic has put them at greater risk and others described girls being forced into sex work as their families became unable to provide for them due to the economic impact of the pandemic. Locations on the fringes of the community, such as the forest and bushy areas, which had always been dangerous became even more perilous, with one woman, herself a victim of rape, advising women and girls never to frequent these areas during the day or the night and to ‘always be on alert’.

As a result of these focus group assessments, CAEPA has identified a series of core interventions for effective long-term protection and support of women and girls in the Mbelem and Ntabang communities. First to engage health personnel and community counsellors on case management. Secondly to create empowerment activity to economically empower women in order to reduce their dependence on men and thirdly in Ntabang was added the aim to develop in target communities an awareness raising campaign that addresses the cultural and social norms that promote GBV and goes on to identify positive coping mechanisms to support survivors within the community.